Check out NBA's Miami Heat at Nike Training Camp working out just like they were at BDHQ.  Kettlebells, TRX, body weight exercises and recovery on the grids.  Love it!  There's a reason we train the way we do here....because it works.
Posted by BDHQ Staff at 8:02 AM No comments:

A letter from Michelle Twigg…Why The Terry Fox Run? 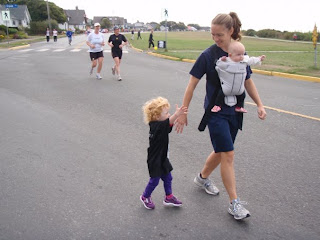 In country where we have so much, including a plethora of opportunities to give back, I am often asked why I am so passionate about the Terry Fox Run in particular.

Of course it is worthwhile to fundraise for cancer research. Certainly it is valuable to contribute to a foundation that consistently delivers 84 cents of every dollar raised directly to the cause. If I’m honest however, my passion for the run has very little to do with the cause itself and everything to do with preserving my hero’s memory and his legacy.

At 21 years old, Terry Fox ran a marathon a day to raise money for cancer research. He ran on a prosthetic leg after losing his own to cancer. He ran 5,373 kilometers from Newfoundland to Thunder Bay, not to win a medal, but to help others who were battling the same disease.

My zeal for the Terry Fox Run began decades before I started my own battle with cancer. In fact, it started when I was in elementary school. Sitting on the floor of that darkened school gymnasium, I first saw Terry in a film. Young, athletic, cute - I was immediately smitten.  What made the greatest impact however, was when the lights came up and I looked to the teachers I so respected and admired.  I saw them quickly dabbing tears away from their eyes before they ushered us outside for our school run.  I spent 12 years in Catholic school and the message was clear and consistent. “Love = sacrifice.  Give of yourself - that is the goal.”  Every year we watched that same film and every year it became more apparent to me that Terry was the embodiment of that message.

As I entered high school, my interest in athletics grew and so did my admiration for Terry.  I’m not a gifted athlete, but I always brought my best game.  I remembered that Terry was at first considered too small and unskilled for the basketball team but that he had practiced relentlessly to improve.  I listened as my coaches talked about working hard, determination, being persistent and having “heart”.  I remembered the film of Terry running all alone, sweating and wincing with pain.  Terry was the embodiment of that message.

After university, I started running and I began to grasp just how momentous the task Terry undertook was.  He ran a marathon a day. I still have not run my first one and I have two legs.  I started teaching and coaching and being a role model myself.  I learned how hard it is to be one.  I showed the film and I dabbed tears away. I also started to see new things in the film.  I still saw Terry trudging along that lonely highway, but I also saw him struggling with the right words in front of the cameras.  I saw him tenderly playing with a young boy who was also an amputee.  I saw him smash a pie in his brother’s face.  Terry was still the embodiment of all those virtues I wished to pass on to my students, but he was also becoming human, which made him even more compelling to me.

When I had children of my own I watched the film through a new lens and I saw a new film.  I also saw the documentarty Steve Nash made called "Into The Wind" about Terry (see preview below).

I saw Betty and Rolly talking about their son.  I heard them explaining they knew that they never could have stopped him or convinced him to take it easy.  I saw the heartache in their eyes as they watched their son run until his lungs were filled with cancer.  I thought about the sacrifice the entire family made and is still making. I also saw the pride in their faces.  I saw how their sacrifice was being honored every year by millions of people around the world.

Terry Fox is a Canadian hero.  Just ask Steve Nash or Simon Whitfield. The Marathon of Hope Terry started has raised funds that have benefitted all of us, because all of us have had our lives touched by cancer.  Once a year, we Canadians are called upon to honor Terry’s memory.  We are asked to go for a run or a walk with our families and friends and to make a small donation – even just a dollar each.  I cannot think of a reason not to do the run.

BDHQ is a community of people working together to better themselves.  It’s a group that helps each other push past pain and to achieve their goals.  They believe that hard work and determination will yield results.  Those are all things that Terry taught me. 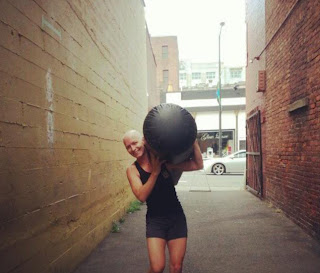 BDHQ prepared me for this fight against cancer.  I went into this diagnosis the fittest I have ever been.  I have maintained my health and my sanity during treatments so far by working out with this community.  I also went into this fight with incredible emotional support.  BDHQ is a family that has held me up at this, one of the toughest times of my life.  It is a family that made me a cheer.  It’s a family that will walk or run with me on September 16th.  BDHQ has helped contribute to Terry’s legacy and I could not be prouder.

Thanks BDHQ, I know Terry would be proud too.
- Michelle Twigg

Michelle.....YOU are our hero!  You're an inpiration to everyone who sees you training so hard before and after your chemo treatments.  Certainly makes people think twice about whinning during class when you're there sweatin' beside them.  You are the epitome of what we stand for - no excuses!  We can't wait to run with you and help you fundraise for Terry, and we hope all you BDHQ-ers out there join us too.  Please let us know by way of email if you would like to run or donate to the cause.

Join Michelle Twigg and her team, "Twiggs for Terry", along with BDHQ on Sunday, September 16th at Mile Zero for the Terry Fox Run.  Registration is at 8:30 a.m. and the run is at 10:30 a.m. There is a 10km and 5km; suitable for bikes, wheelchairs/strollers and roller blades.  Dogs on leash welcome.

UPDATE:
To donate to "Twiggs for Terry" click HERE.
To sign up to run with the Twigg's at Mile Zero, click HERE.
Posted by BDHQ Staff at 7:21 AM 2 comments: 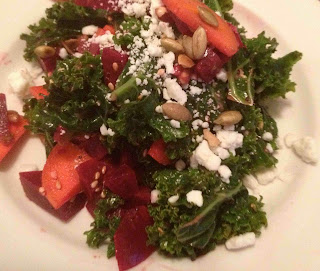 This salad is the ol' reliable of my kitchen. It's quick (other than the beet boiling), colourful, tasty, and holds up well enough in the fridge to make it to a next day lunch. It's adapted from a recipe my naturopath gave me years ago while doing a long cleanse to sort out some food sensitivities. If you're doing a cleanse leave out the goat cheese and go with apple cider vinegar instead of red wine vinegar, and you should be good to go.

Place all dressing ingredients in a food processor or blender and whirl until combined. Alternately, if your herbs are chopped finely enough, whisk everything together by hand. Old school.

Scrub beets and place in pot with enough water to cover them. Bring to a boil, then turn down and simmer for one hour, or until tender. Drain and rinse with cool water. Peel and cut into 1/2 inch cubes.

Lightly toast pumpkin seeds in a hot dry pan, tossing to prevent burning. They're done when they smell nutty and start to brown. It's easy to overdo them, so keep a close eye.

Wash kale and beet greens. Bring a pot of water to a boil. (Hint, I use a pot with a pasta insert as it makes it fast and easy to remove the greens and avoid overcooking them). Add kale and beet greens and boil about 30 seconds, until bright green and slightly softened. Remove immediately and rinse under cool water. Spin out excess water and tear into small pieces.

Cut carrot in half lengthwise, then slice thinly.

Makes approximately six side salads, or a few mains. Super delicious served with grilled chicken.
Posted by BDHQ Staff at 3:14 PM No comments: 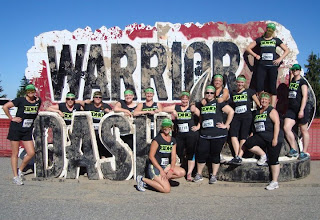 BDHQ's Biggest Winners (BW's) do a lot of goal setting as part of their program, and one of the goals they set is called a BHAG - a Big Hairy Audacious Goal.  A few BW's decided that this crazy race called the Warrior Dash would be their BHAG.  It domino-ed into a whole team going over cause it sounded like too much fun to pass up.

So this past August long weekend, trainer Lovisa and a pack of BDHQ-ers went to Mt Seymour to participate in the race.  If you've heard of the Tough Mudder series, it's like that on a smaller scale.  This particular location of the Warrior Dash was 5.3km of heat, hills and obstacles. See race map here. 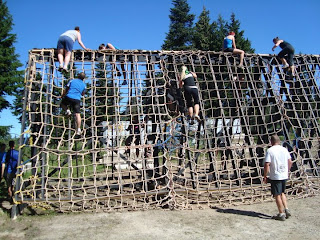 There were hurdles, rope ladders, barb wires, fire and a whole lot of hill climbing in the blazing summer sun.  The heat was probably the hardest part of the race. 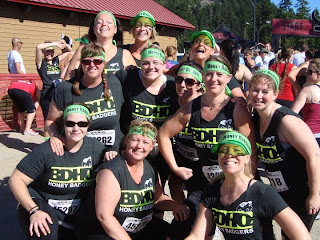 Those BW's need to set some new goals ASAP cause they killed this BHAG!!  Each one of them completed the race and had an awesome time.  Minus a rolled ankle here, broken tooth there, we escaped the mountain mostly unscathed.  We are SO putting in a team in for the Tough Mudder next year.  Our intro to the world of obstacle course racing will lead to many more to come for BDHQ. 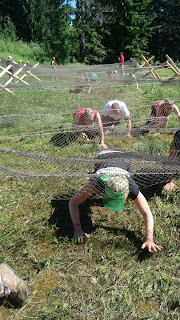 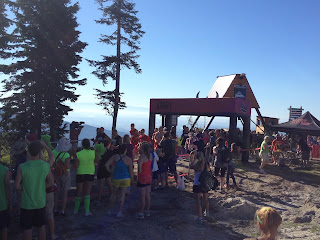 If you're interested in joining us for the Warrior Dash, Tough Mudder or Spartan Race next year, email us and let us know!
Posted by BDHQ Staff at 1:57 PM No comments: